Jack was on the road again, and sometimes we'd just have to turn a blind eye and let him go. As far as as he was concerned, his wheels were as big as theirs, and he was on a mission - to the store for ice cream! As a joke I drew a skull and crossbones on his flag to let people know he was dangerous - he liked it, so it stayed. 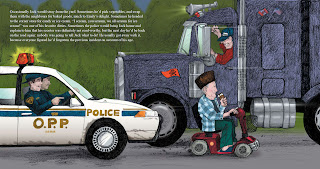